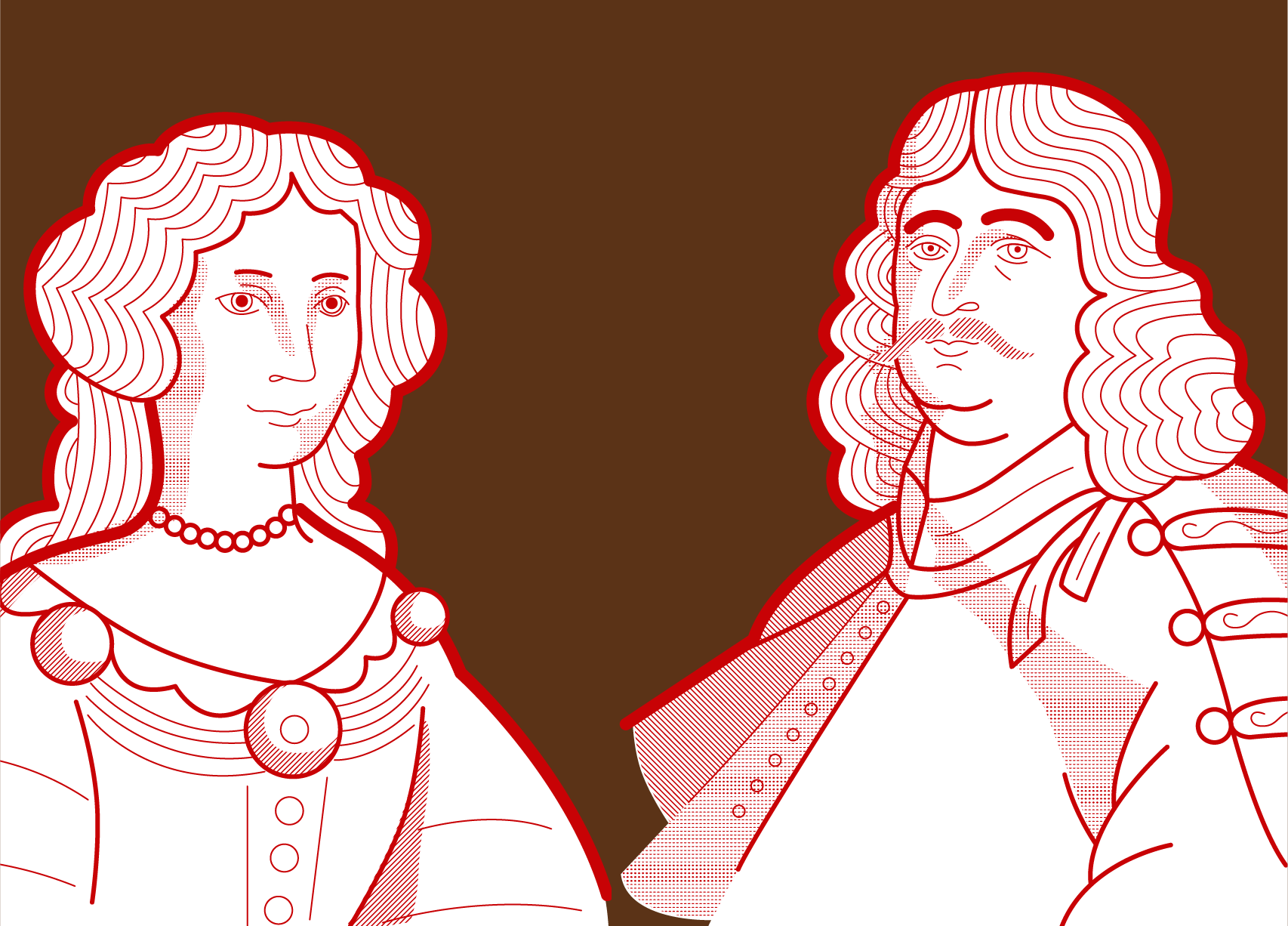 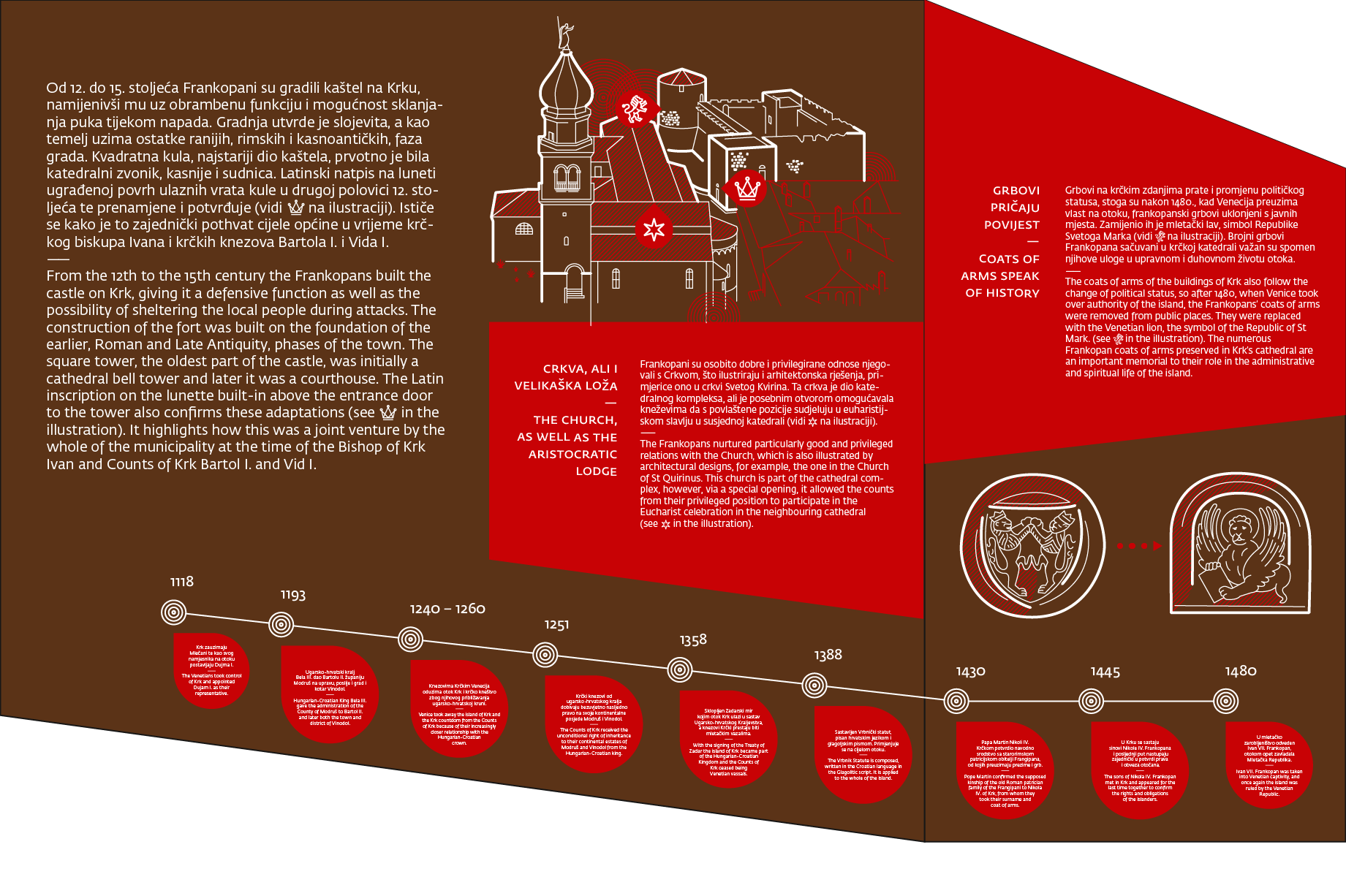 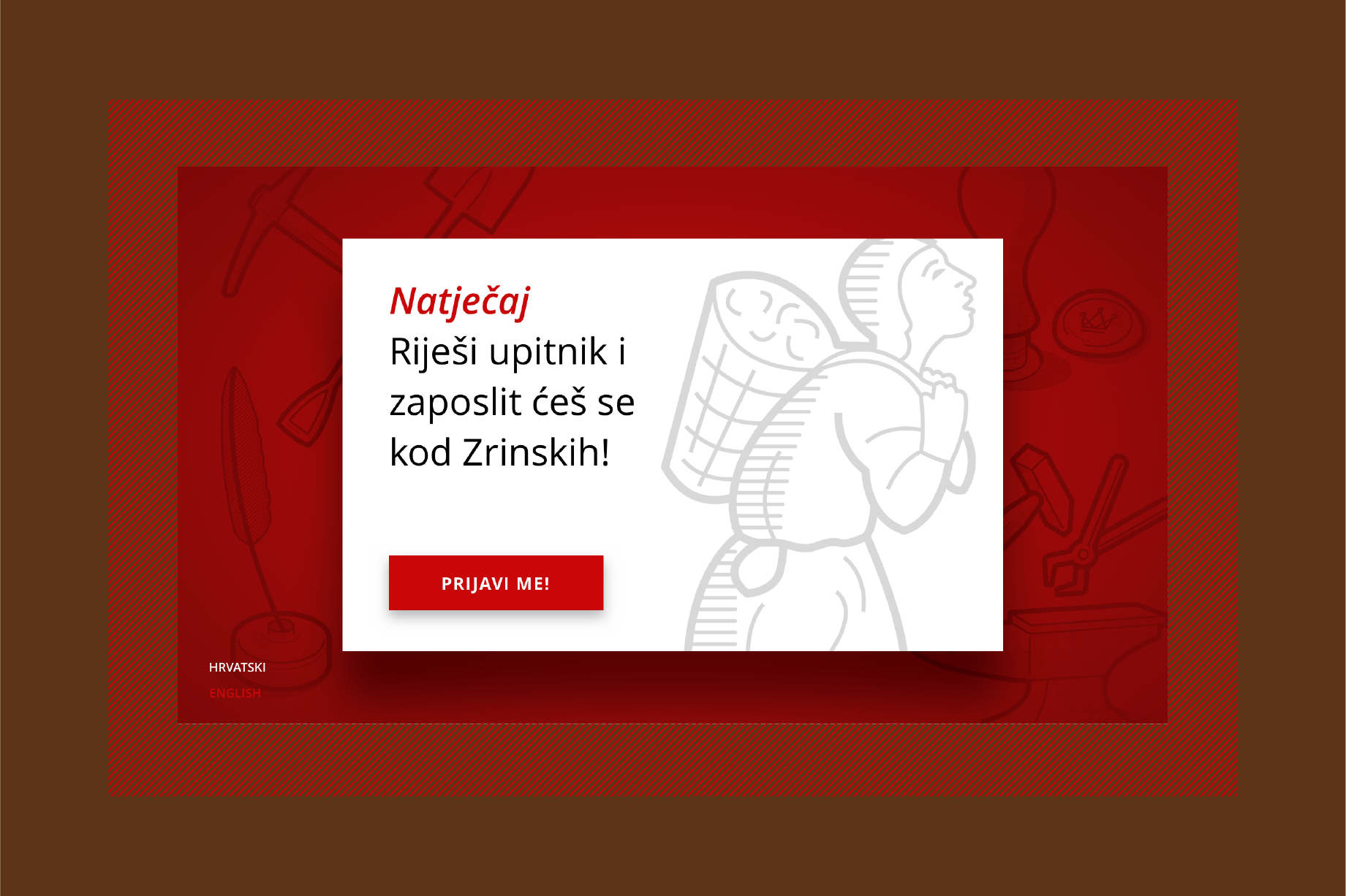 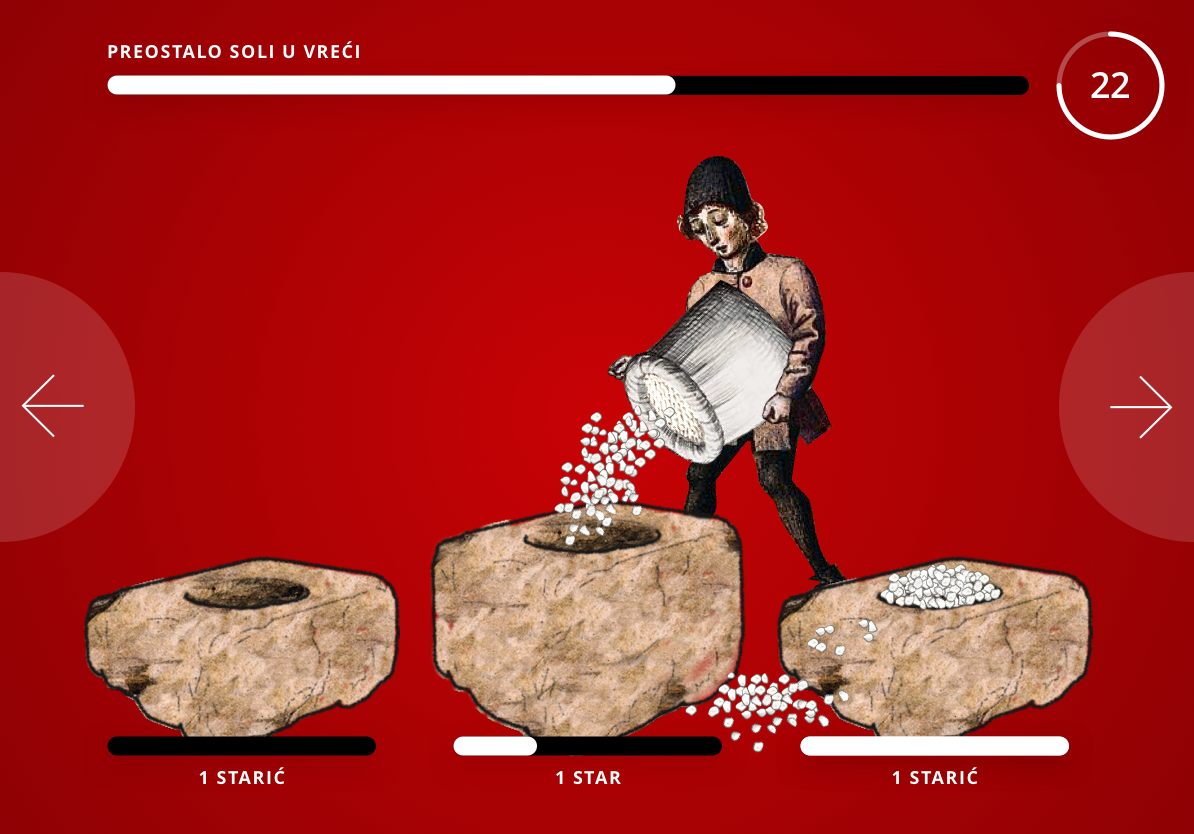 Seven new interpretation centres on the Routes of the Frankopans

In just five months together with collaborators,Muses have arranged the story for seven new interpretation centres on the cultural-tourist route the Routes of the Frankopans.Find out in which town which famous Frankopan is waiting for you as your host, discover the secrets from their personal and public lives and also peer behind the scenes:into the Muses’ small workshop where this, in many ways, pioneeringproject of the interpretation of local heritage was developed and implemented.

Did you know that long before fiscalisationin their Statute of Vinodol the Frankopans used the slogan “it doesn’t count without a receipt”? That amongst the famous aristocratic family and the grey highland dormice there existed a centuries-old eco-pact of friendship?Are you unemployed? Which job would you get after applying for a job at the feudal estate in Čabar?Do you need a respite for your soul? – find out which Frankopan fortress the Blessed Virgin Mary chose to move her birth house to from Nazareth. Do you have a business idea? – try your hand at being a trader in mediaeval Bakar exchanging salt for grain.

A route with hosts

Responses and answers to this as well as many other questions connected to the five-hundred-year-old story of the Frankopans and Zrinskis have already been prepared and woven into the great interpretation work which in the last five months Muses have developed in the refining and ordering of the cultural-tourist route the Routes of the Frankopans. Together with collaborators, they have developed the interpretation contents for seven new interpretation centres of this grand heritage project which was initiated in 2005 by Primorje-Gorski Kotar County.The aim of the route was the renewal, the modern evaluation and revitalisation of the old castles and Croatian noble families without whom the national history from the beginning of the 12th to the second half of the 17th centuries is unimaginable.

In the first phase of the financing of the project from the fund ‘HERA – sustainable tourism management of Adriatic heritage’ the Visitor Centre of the Route in the Castle of Nova Kraljevica, which was opened in 2016, emerged. At that time, Muses worked out the covering interpretation plan of the route, the concept of the permanent exhibition, the development of the content and the interpretation texts of the Visitor Centre. That same year the European Regional Development Fund, besides the financing of the renewal and refurbishment of the castles and their cultural-tourist offer, also included the equipping of seven interpretation centres, which was almost half of the castles on the route, in the financial support. These centres are Bribir, Brod na Kupi, Čabar, Trsat, Krk, Grobnik and Bakar. Each of these castles and towns holds aspecial story about the Frankopans and the Zrinskis, because later these two families were linked to one fateful thread of national history, and the task for Muses was not only to present the factsbut also to revive them – by devising a clear narrative for the contemporary visitor and chance tourist.

The Frankopans are not characters from historicaltextbooks or legends from folk poems, they were, first of all, real living people, their characters and doubts developed in their time, space and surroundings. Due to this each interpretation centre along the route has been allocated a host from the members of the Frankopan or Zrinski families. This is why the first encounter with a centre has been personalised with a personal statement by the host.

A link with the present

So, for example in Bribir visitors are guided by Bernardin Frankopan, who was responsible for the great restoration of that castle.In the space of the interpretation centre which is located on the second floor of the Tower, with his mediation,the visitors discover the thematic complex of the relationship of the law and justice with which this building is particularly imbued. Bribir is one of the towns of the signatories of the Statute of Vinodol, a legal document which is taken as the starting point of the protection of human rights in these regions, and with itthe Frankopan family was acknowledged as the highest judicial authority in Vinodol. The tower also hides another side of the story, underneath the centre are prison dungeons, in such surroundings the provisions which related for example to the treatment of high-treason, the hosting of refugees, violence against women and so on can be vividly compared.

In the area of Gorski Kotar there are two interpretation centres on the route:in Brod na Kupi and Čabar, and each has a Frankopan feature and a different connection with the present – this time with trade, business and ecology.Brod naKupi is led by Stjepan II. Frankopan Modruški who charged traders passage at the river crossing and built a castle, today named after his decedents as the Zrinski’s Kaštel. In the premises of the new permanent space of the Natural History Museum also presented are interesting features regarding the Frankopan and Zrinski families’ relationship with nature.

In the Čabar interpretation centre visitors are not guided by a member of the Frankopan family, but by one of its equally worthy successors - Petar Zrinski.He will instruct visitors in the basics of the leading a successful family feudal manor, as was the Frankopans’ and later the Zrinskis’, and he will also offer them a game:which occupation would they be doing if they were employed at that time.

The skill of a good society

The other two centres deal with a theme that could be called the skill (the creation) of a good society, in which the activities of politics, culture and spirituality are entwined.In the first part of these three, the interpretation centre which is located in the Frankopan castle in the town of Krk is particularly interesting. This building is not only a strong architectural symbol but also an image of social control and the network of the Frankopans’ aristocratic power.In this place the host was also specially chosen:he is Dujam I. of Krk, the originator of the lineage of the Counts of Krk, later the Frankopans.In the interpretation centre at the Trsat fortress Martin IV. Frankopan, known as the Pious, introduces the role of his family to visitors in the cultural wave and spreading of spirituality, which are the activities without which today’s social networks would also be unimaginable.

Grobnik castledeals with a theme for which humankind has still not found the right cure.War. In Grobnik Bernardin Frankopan is the guide once again, this time in the role of a military commander.The theme of the centre is the fatal battle with the Ottomans on Krbava Field from which Bernardin barely came out alive.However, Grobnik is also a centre of memory and a kind of starting point of what today is called information:in Grobnik Bernardin established a scriptorium from which also emerged a breviary whose pages were supplemented with a detailed report by one of the priests about the Battle of Krbava Field.

In the interpretation centre in the castle in Bakar, the visitors are not guided by one member of the family, but by two and they are one of their famous matrimonial unions:Ana Katarina Frankopan and Petar Zrinski.Through the theme of the trading links of the Frankopans and Zrinskisthey will also show visitors the difficulties which troubled the population of this region and invite them to take part in the commerce of this period in time.

This is, of course, just an outline of what the new interpretation centres on the Routes of the Frankopans will offer. Onto such an arranged thematic backbone the details are laid out: for example those linked to the visual identity and logos which visitors follow alongthe route, through the comparison of the living conditions in an individual castle, the story of political games, a virtual representation of a battleground and so on. In an interpretation sense,the particularity of the tasks was in the satisfying of generational differences and the developing of special models of interaction which the new digital age enables.

How to attract the attention of a diverse visitor population, because the centres will be visited by first graders, the middle-aged and the oldergeneration, whilst still bearing in mind gender and national diversity? The model was found in the common denominator of curiosity and games, as universal human determinants. This principle, relying on the concept of the central HQ in Kraljevica, is the link of all the interpretation centres which in such a way become a kind of time capsule – a playful vessel for a simultaneous trip into the past and the raising of the awareness of the present. The merits for this, we hope, excitingand pleasant navigation, of course,go to the architects and designers.

Muses Ltd. for consulting and managing in culture and tourism

The use of archive material was made possible by

National and University Library in Zagreb