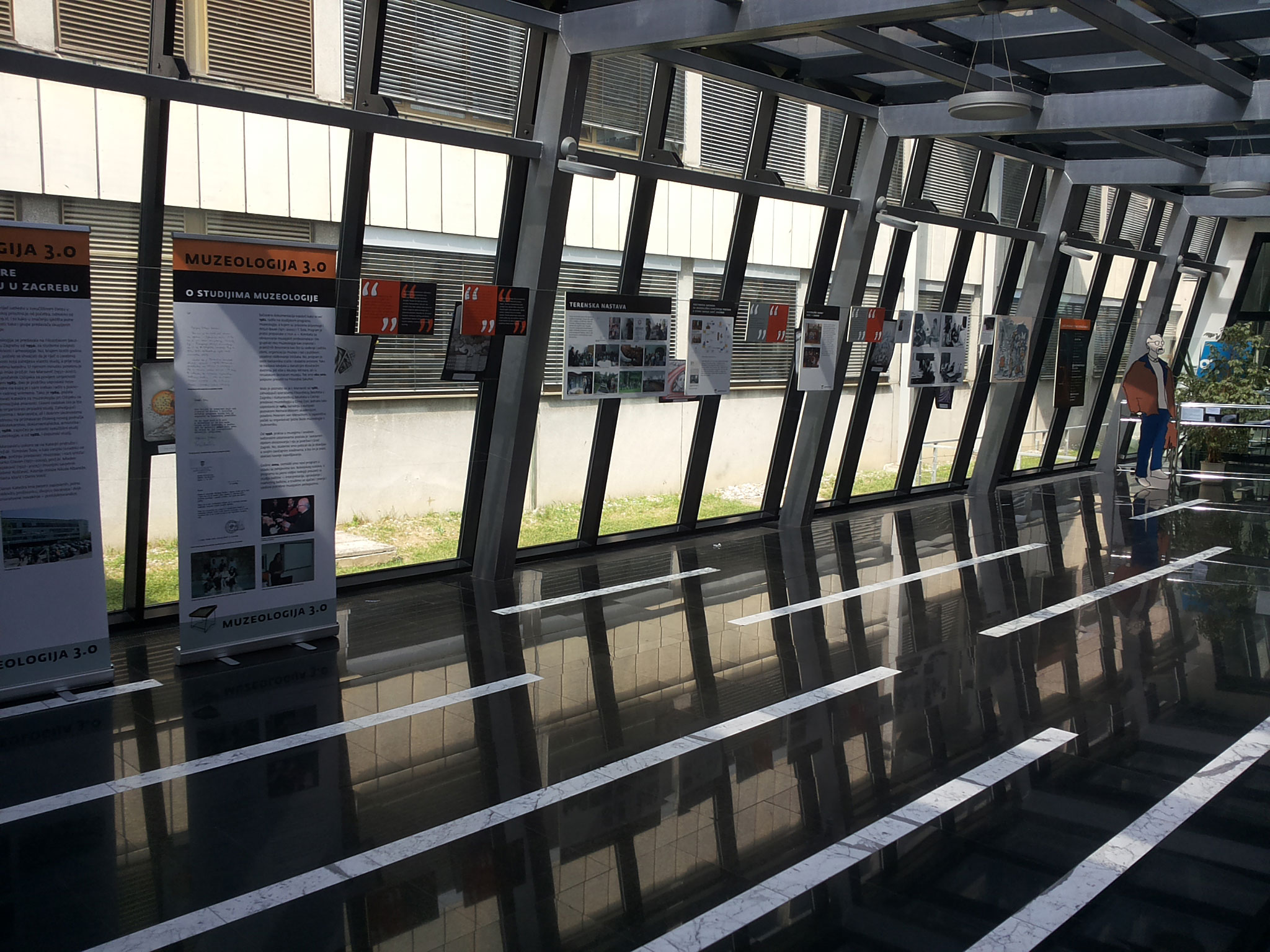 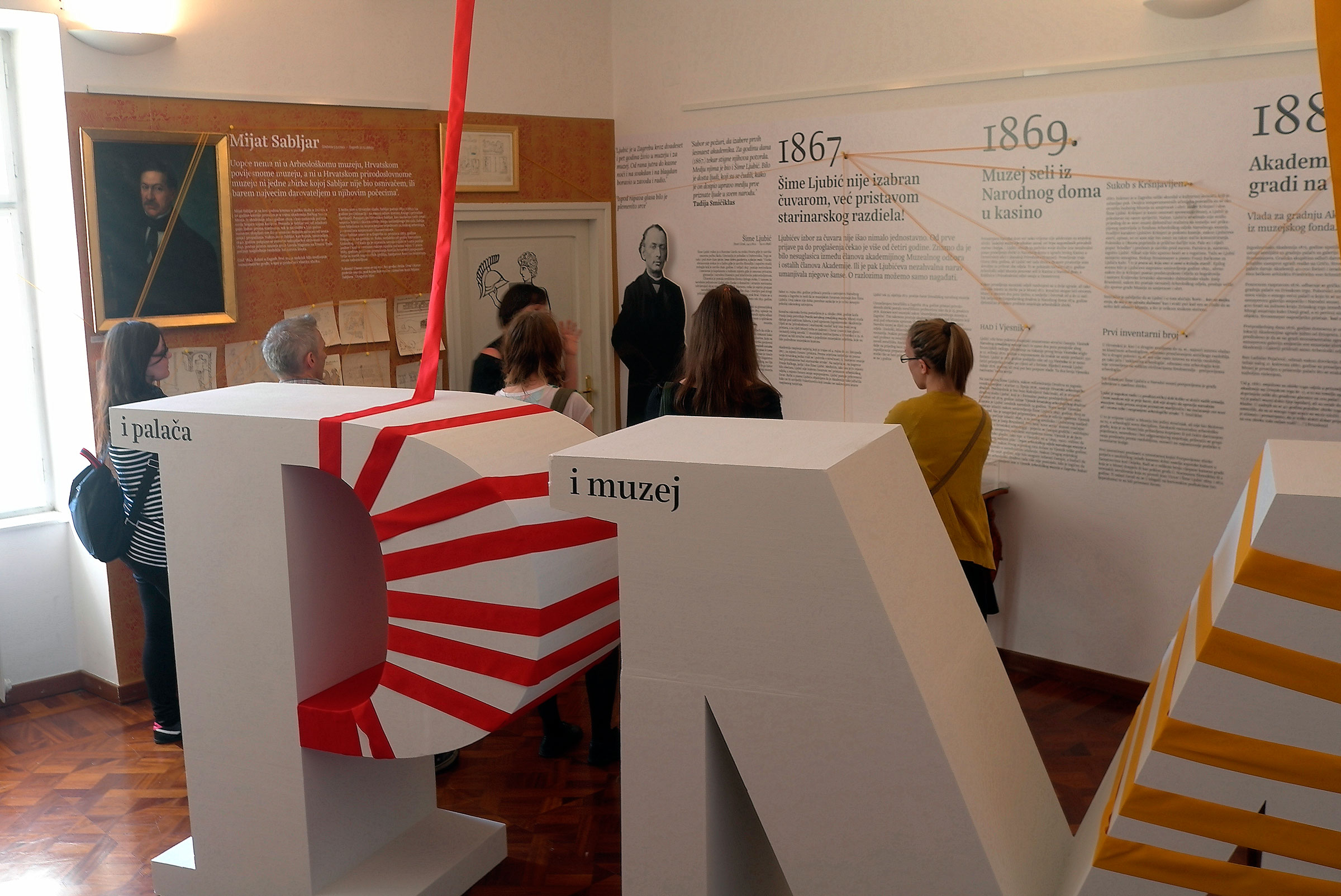 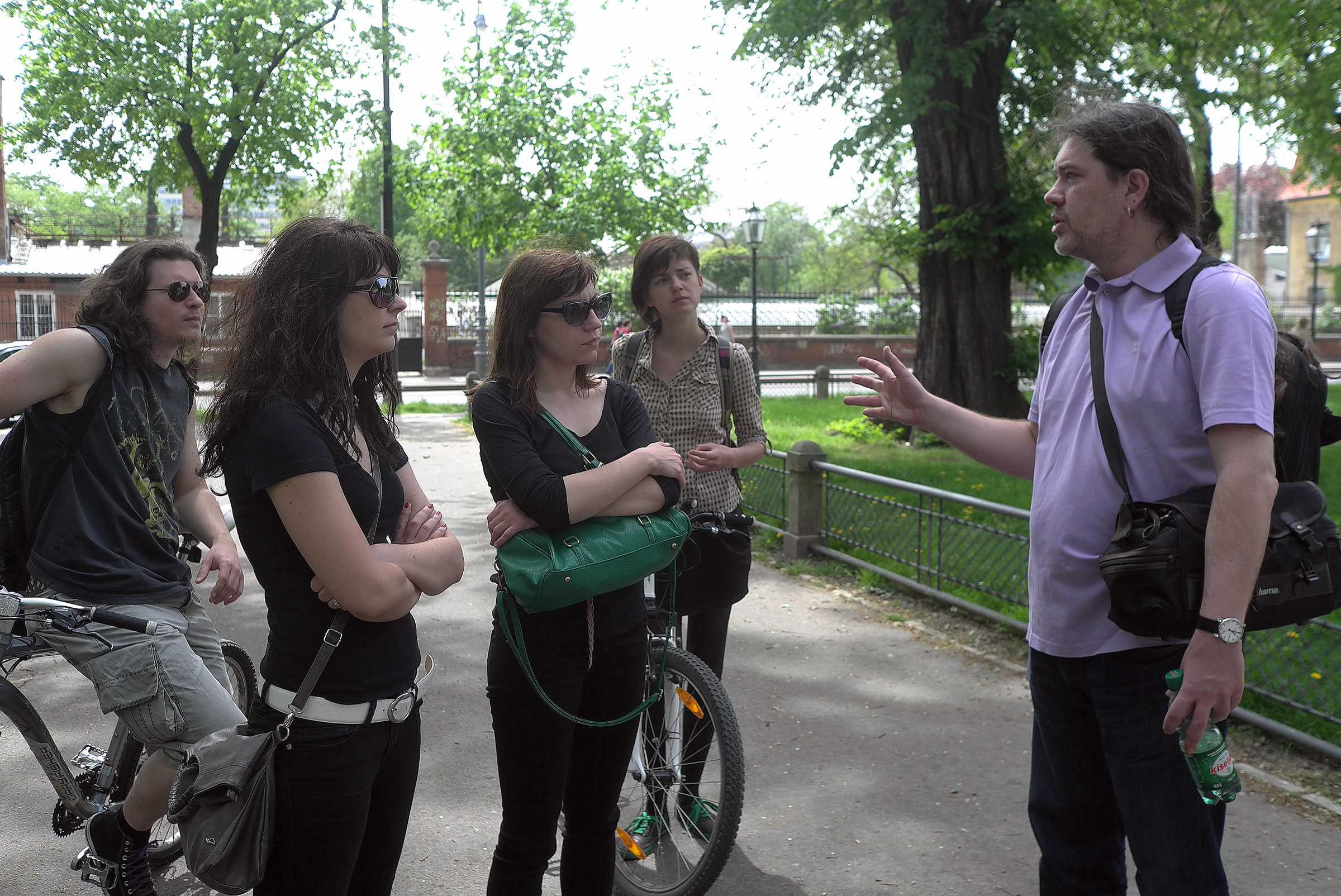 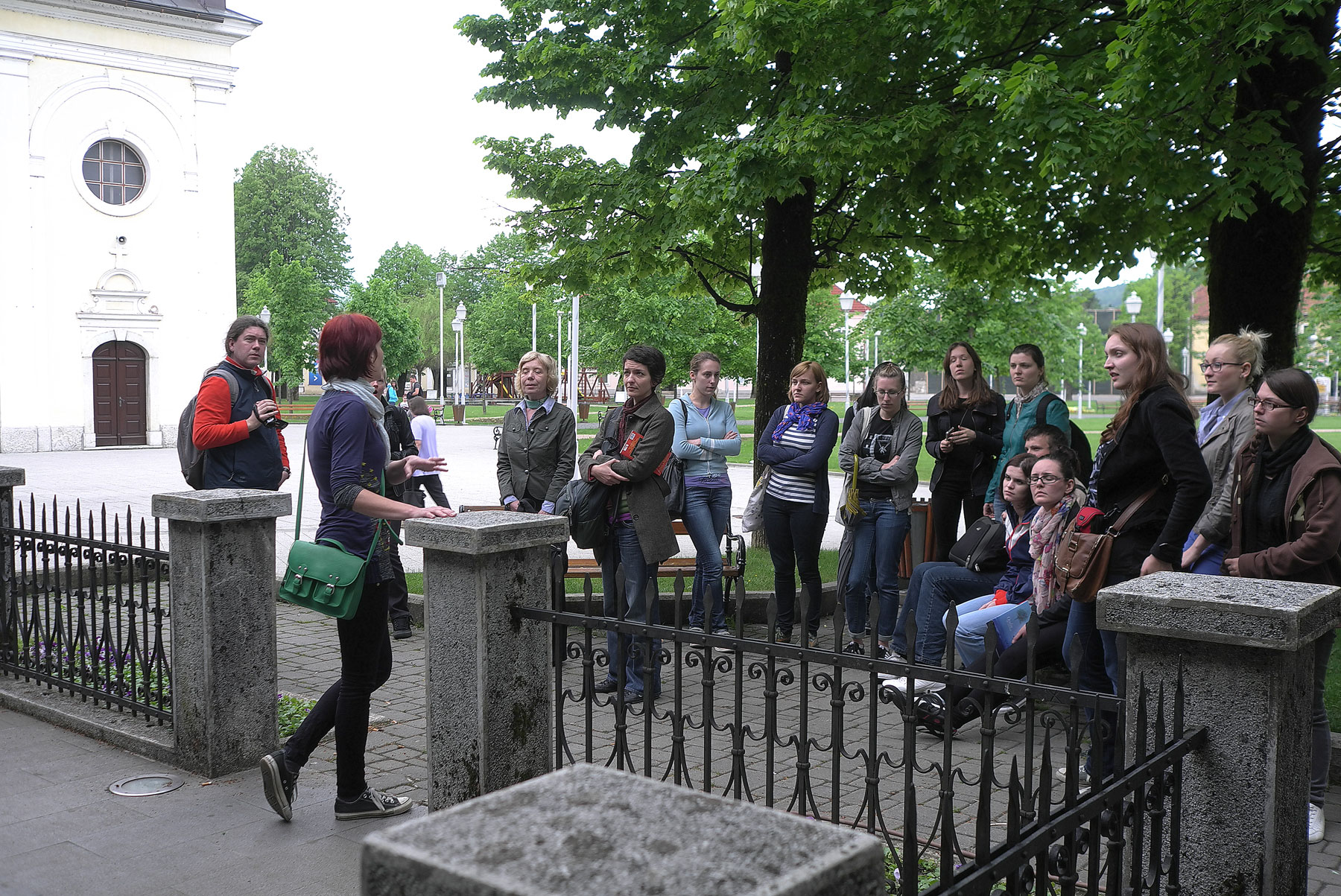 When I grew up
I want to be a museologist

Ivica is 4 years old and when he grows up he wants to be a – museologist. At an age when boys want to be astronauts, pilots or at least firemen, such a choice seems unique. Ivica says that he decided about this after a visit to the Museum of Childhood in Rijeka.

“Museologists take care of the things that people used to play with and show them to others. Sometimes they are toys, sometimes pictures and also sometimes guns" says Ivica. When I mention this to Prof. Darko Babić Ph.D he laughs, he is glad that his line of work has such as young follower.

“In an organisational sense 10 years ago we moved over to the Bologna system (3+2). The aim thereby has not changed: To put it simply, we prepare our students with the understanding of constructing, managing and interpreting heritage, completely independently of an institutional environment – of a museum, nature park, archaeological site, regional library, interpretation centre. In doing so the best models for us are museology departments in Europe, for instance Museum Studies at the University of Leicester (UK) and the Reinwardt Academy in Amsterdam”, says Prof. Babić. Five other teachers work with him in the department. 25-30 students enrol in museology studies each year, although there is the possibility of a single-subject study, the greater number of attendees study alongside one other subject: most commonly ethnology, archaeology, history, art history and so on.

“Museologists have long since moved away from the documentation, protection and preservation of heritage. This is why we also teach our students the management, communication, and financial planning connected with exhibition and museum projects and eventually the running of their marketing. All of this is happening at moments when Croatian museology is at an important turning point. Museums can no longer function as they did 20 years ago, these institutions must be significantly more open and open to the people. It isn’t enough to exhibit valuable heritage in display cases, but to present it so that it attracts the public who for example are not experts in archaeology or some other discipline. Today’s public who come to museums are completely different to those of previous generations: they are curious people brought up with the culture of video, smartphones, the Internet… Their expectations are completely different and if we want to raise that audience so that a visit to a museum becomes a top priority, we must create a habit – in the same kind of way in which the theatre or the film industry has nurtured its audience. If we don’t do this now, in 10 years it will be impossible – a generation will be lost, because we did not know how to access it. Some museums in Croatia have understood this, some haven’t, so I still across some colleagues who consider the new trends as “just fun”, which for me is a misunderstanding”, says Prof. Babić.

Although the programme of professional development gave many young graduate museologists the opportunity for them to work for at least one year in a museum, it is difficult to believe that these institutions are able to solve the unemployment problem. What opens new possibilities is actually the birth of interpretation centres, admittedly it is not possible to employ large numbers of students in them (it mainly concerns a single person who must master numerous skills).

“Interpretation centres are no less valuable than museological institutions. It is a relatively new form, at least in our environment, the difference of which is that they generally do not have a valuable collection as a museum does. However, what they build their work upon is the art of telling a story, and it is that which is missing in many of our museums. What I want to say that it is not enough to just put on display some ancient vase, a painting or for example a mediaeval sword, but you must put them in context, you must weave a story around them which reaches back into the past, but it should also have links to the present day life of individuals and the community. In this sense some interpretation centres have in fact made a museological leap forward. With such examples and strategies, we get to know our students”, says Prof. Babić, particularly highlighting the centres which have dedicated themselves to heritage, a notion which in modern times has gained a very different meaning than before.

Prof. Babić believes that Croatia should not be afraid of “hyperinterpretation” (in the sense that a high number of interpretation centres supplants a real event), which it sometimes felt in highly-developed countries.

“We are still at the beginning of interpretation, which with us must firstly be the quality of the interpretation, whether it is to do with nature, culture or with other values. We teach and raise our students so that they will be a guarantee of that quality, that they are in the centre of the process, a kind of mediator and catalyst of these energies that heritage within the community will be. Only such a set story can bring a return of the investment – not in the sense that a centre or museum will be become highly profitable, but that it will indirectly act on the improvement of the quality e.g. of the tourist service as well as the life in the region in which it is open. In this sense, my students, although everyone sees them as primarily linked to the past they also have a link with the future!”, concludes Prof. Babić.

And what does one of his present students say? How did he became a museologist?

“When I was child I loved to rummage around in a suitcase in which my mother kept old bits’n’bobs, which we now in the profession would call memorabilia: there were some pebbles, jewellery, drawings, photographs, milk teeth, even some hair, old clocks, playing cards, postcards from other continents… However, the object that touched me the most was a box of cigarettes more than 20 years old – it was the last box of cigarettes of my late father in which 15 of the 20 cigarettes still remained, because he didn’t manage to smoke them before he left us. It is this memorabilia which holds within itself the preserved moment that turned into the emotional mess in my head”, in this way Robert Samovojska describes the initial impulse. After finishing art high school, he began philosophy and comparative studies of world religions and volunteered in one heritage based institution. His great interest opened a position for him as an assistant curator at one exhibition.

“One of the first facts that they tell us on the course is that we all arrive from various backgrounds and various professions: In that is the charm of museology as a profession! Museology is an interdisciplinary discipline by itself – it may need the help of some other scientific disciplines, but they are anyway an integral part of it as an auxiliary discipline. However, it is a fundamental initiator to all of us, a kind of internal sensibility to the cultural heritage that we want to preserve and leave to those who come after us, and that we momentarily interpret to ourselves and our users”.

When expectations are concerned, Robert recalls the beginnings. He says: “On one occasion one professor joked (about my ambition) that I must understand in Croatia that our profession is still moving along an unusual path. To be honest, I didn’t expect hills and valleys, but in return I got more than expected. The course taught me about the wider field of culture – the interweaving of ideas such as management, protection, politics, ethics, public administration, interpretation, society, pedagogy, acquisition, sustainable development, access to information, tourism, potential… I am convinced that I can work in the field of culture which is also perhaps the greatest potential for a future workplace of someone who believes that the ideal of Renaissance man is still feasible in every individual”, says Robert.

And Ivica from the beginning of this text? If he is determined enough he would be able to strive for his mentors to be – the Muses.