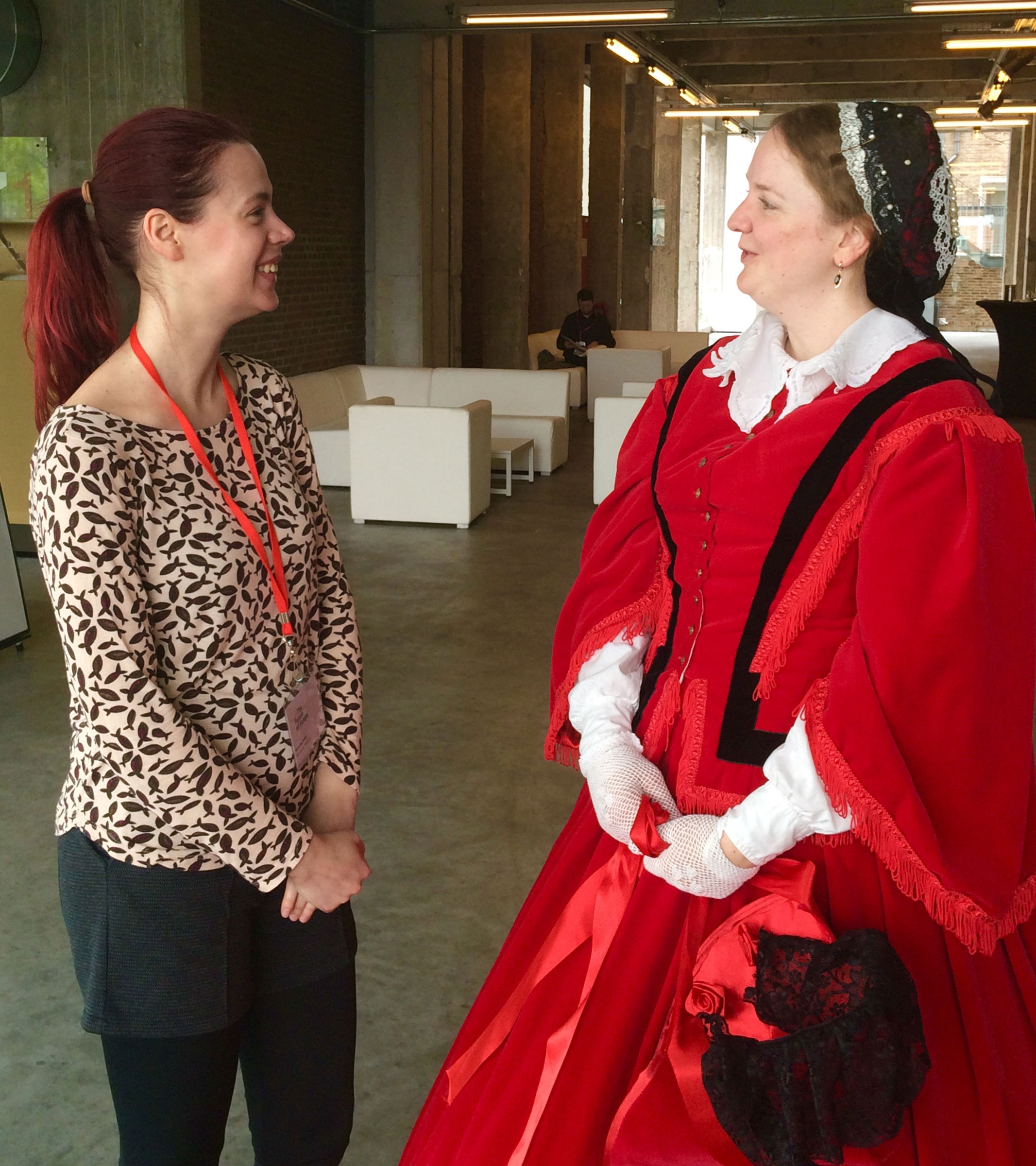 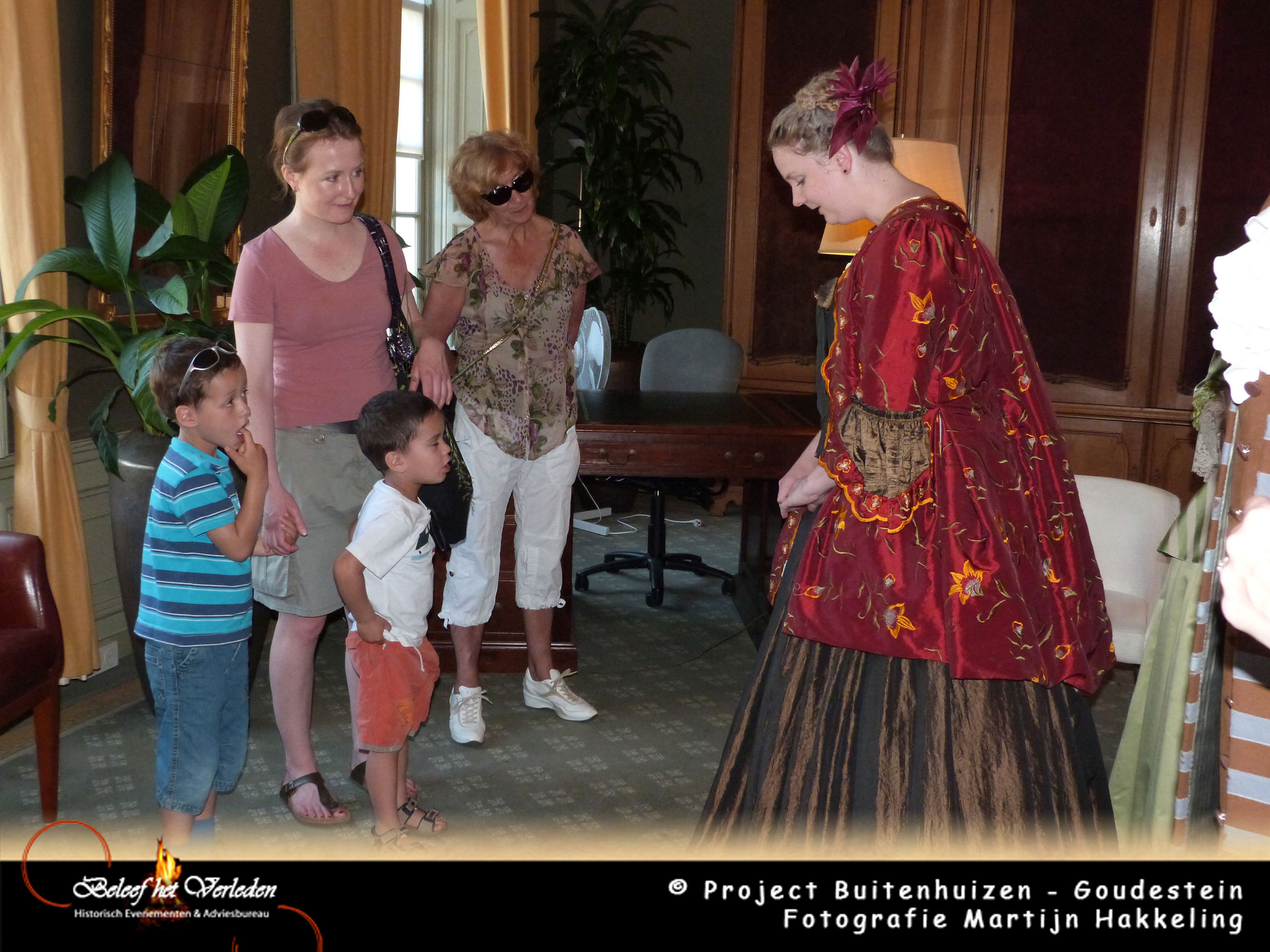 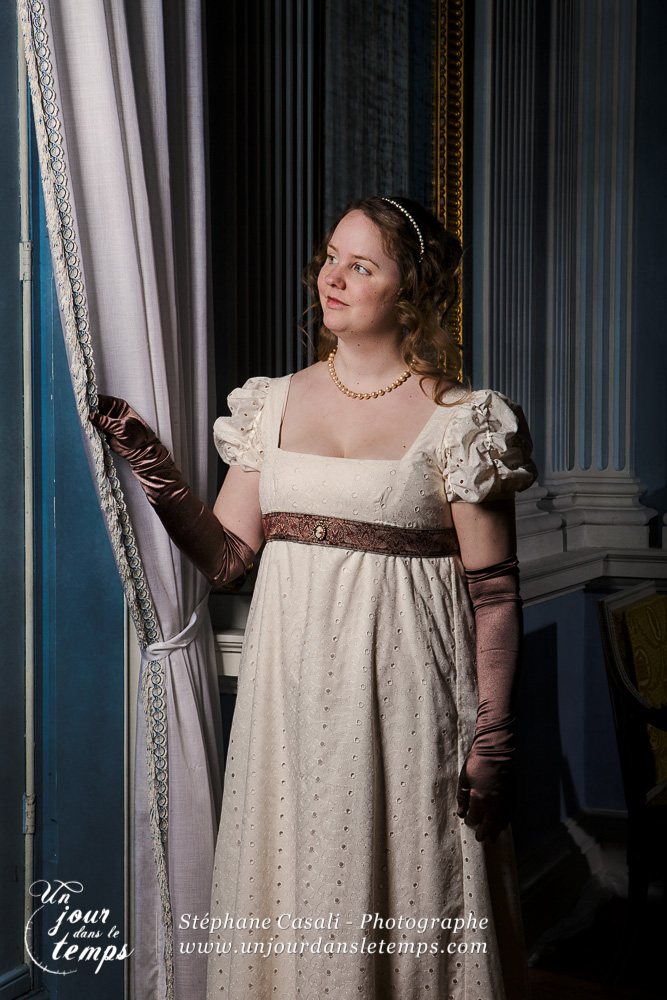 The European Association for Heritage Interpretation annually gathers experts from the field. This year’s conference was held in the historic Belgian town of Mechelen where the main theme of the gathering was ‘Heritage interpretation for the future of Europe’, and a special lecture was held for us by Martine, a lady direct from the 19th century.

When we first saw Martine Teunissen it was like an encounter with a ghost, to be more precise – a meeting with a live ghost of times past. At the registration desk in the lobby of the conference centre, amidst the standard European muddle of the beginning of the 21st century, Martine welcomed us as though she had been directly teleported from the end of the 19th century.

“You say you travelled by air!? Really!? You say that this machine is called an aeroplane. I have heard something about this, but are women allowed to travel by it? Alone? Without male accompaniment? Nevertheless, carriages seem much safer to me. This is how real ladies travel”, suddenly she showered us with a torrent of questions thawing and relativizing our modern vision of the world with her honed to perfection viewpoint of la Fin de siècle. Just as her outfit was identical down to the tiniest details to those worn in Europe of the time, so was her spirit: she didn't know about the Internet or Facebook, she hadn’t heard about space flight and Einstein’s discovery, although she had heard something about the electric lightbulb and was delighted with Ibsen’s A Doll House, the drama “which had just premiered” in her town. Who knows how long our game, which both we and Martine equally enjoyed, would have lasted if our conference obligations hadn’t pulled us away. Not wanting to miss a unique opportunity to find out more about Martine, at almost the same time, we reached for our business cards, and she too: from her little bag, an object, which only from the end of the 19th century, an exclusively male piece of apparel, became an essential woman’s fashion accessory, she pulled – a business card.

On the business card it said that Martine was the creator and owner of a company that organises historical events and offers advice called Beleef Het Verleden (Experience the Past), which is based in the Netherlands. Her job was being a costumed interpreter of living history. “I help museums, schools and castles in preparing events which revive history. At such events costumed interpreters use their skills in order to educate the public about people and events from the past”, Martine explained to us adding that she had done this since 2008. She works in almost all the regions of the Netherlands, as well as in Belgium and France. About ten hours later in a quiet little café we were talking, this time both us and her, comfortably settled – in the 21st century.

“I studied history at Leiden University in the Netherlands. I spent one part of my graduate studies at the College of William and Mary in Virginia, in the USA. The history department works closely with the Colonial Williamsburg open-air museum where I researched their Revolutionary City historical theatre programme. After returning to the Netherlands I wrote my graduate thesis on how to present the past to the public and showed how various fields affect historical presentations in the public domain: historical studies, the needs and expectations of visitors, goals of museums, etc. I was particularly intrigued by the question of what visitors learn from living history and during my research I convinced myself that by learning about history via a face to face encounter with a historical figure was one of the most fascinating ways of learning about the past. This inspired me to start my business”, said Martine, adding that the very first idea about the costumed revival of history appeared right at the time of that lady whose character we had met that morning had lived.

“There then appeared the first open air museum, Skansen in Sweden, where the local people dressed in historical and folklore costumes in order to keep their folklore alive. However, today this term means much more than just dressing-up. It has a greater focus on interpretation. A costume is a tool that brings the people’s imagination closer to the past and conjures up for them something that they cannot imagine, although a costume itself is not the main point of costumed interpretation. Interpretation of the past is fundamental”, she tells us, concluding that it is a demanding job that requires the skills of a historian, teacher and performer. She revealed how she acquired it by telling us about the challenges of her graduate thesis.

“In my work I use skills acquired during my history studies and teacher studies. The official title of my graduate thesis was ‘The presentation of the past in public fields.’ Experience of the past: The reconstruction and recreation of history’ at Colonial Williamsburg (2008) on the basis of which I have prepared a series of lectures for the beginning of 2017. I will hold them in conjunction with an online historical academy”, explains Martine, adding how it will be a ground-breaking event, because, besides initiatives for the establishment of online academies of living history, there doesn’t exist a course at the university level where it is possible to learn about how to be a costumed interpreter of living history.

“I acquired many skills and experience just by doing this job”, she says slowly introducing us to the secrets of historical transformations.

“I am very interested in women from the 18th century who I have already interpreted several times, and particularly dear to me is the character of Constantia Huydecoper. She was a member of an elite family from Amsterdam.

A large number of letters, which she sent to her husband, has been preserved, and from them one can read about the extraordinary character of a woman who hadn’t concealed her emotions at the time when a very formal relation with one’s spouse was expected. The story of her life is full of love, drama, everyday life and children, and it is all intertwined with the broader picture of the life of the elite society in Amsterdam. She presented us with a new perspective on the life of the elite of the 18th century”, she told us, adding how this is a kind of specialisation, although the span of her roles and costumes dates from Roman times to the 20th century, including the lower, middle and upper classes.

“When you take on the role of some historical figure, you must be able to “read” people in the audience and assess whether they are ready for your game. Do they really want to travel with you into the past? Do they want to speak with you as though you really are a historical figure? From the first moment of the conversation you must present the historical period and explain to the audience who you are and sense whether the audience has accepted it. It is also important to lead the audience through the themes that you have prepared. As the guidance is based on improvisation, the audience has a great freedom. Regardless of that, you can always lead them towards the theme that you want to talk about. A historical location (which is sometimes missing) and historical costumes – they make the audience ready to dismiss any doubt or scepticism. Therefore it is important that the costume is of good quality and convincing, and you as the character should be open, proactive and convincing too”, revealing to us the secret of enticement that she had used on us that very morning. History also led her into costume design and she very often makes the costumes herself in her studio.

“In Netherlands it is difficult to find good quality costumes to borrow, so sometimes I rent costumes from La Compagnie du Costume in France that deals in them. I also love to collect historical objects, however, they must have some purpose. This means that I use the objects in my projects, and they don’t just sit on my shelves”, she says and adds that in her free time she lives “half in the past”. “I join in with Art Deco tours, I participate in dinners and dances inspired by the 18th and 19th centuries and I organise vintage walks, of course always in the appropriate costumes. It is all connected primarily to my job, but it’s also a lot of fun”, she laughs adding how her future is actually – in the past.

“I dream of buying some land with a historical story, where there will be a house where I will live and which will also serve as an office with special rooms for certain projects. I would love to have a ballroom, a dining room, historical rooms for hire (overnight), areas for children’s activities for various historical periods, some land for growing crops and for animals, and a building that was once used as a barn, in order to extend the accommodation capacity, like bed and breakfast”, Martine tells us about her wishes.

When we tell her that we don’t doubt that the breakfast would also be in a historical style, which would also widen her skills in a gastro-interpretive direction, she says - “you can be sure of that!”